For my sister’s baby shower, I really wanted to try cutting gum paste with the Cricut.  There is a new machine called the Cricut Cake, but before they came out with this, cake shops used the regular Cricut Expression to cut gum paste and fondant.  The first step was to design the cake.  Sticking with the elephant theme, I layed everything out on SCAL: 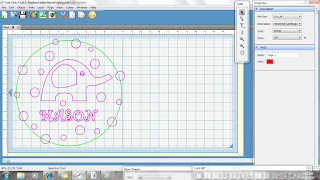 I wanted to put Mason’s name on the cake, but as you will see later, this ended up not working out 🙁
I decided to do some polka dots on the cake, mainly because I saw this done on other cakes and thought it would be relatively simple to do.  As it turned out, I used some of the dots to cover up flaws in the fondant.  I will say fondant and gum paste are finicky substances to work with, that’s for sure! 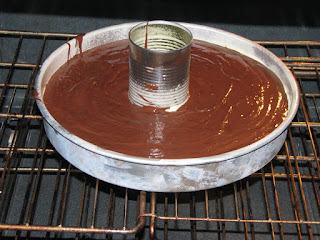 My sister has been craving chocolate lately, so I promised her the cake would be chocolate.  I used the cake recipe I learned in the class I took years ago.  The instructor also taught us to place an empty can in the center of the cake pan when baking a larger cake.  Fill it with batter the same depth as the rest of the pan.  This will ensure that the center of the cake gets done at the same time as the outside edge.  After the cake cools, just pop the cake out of the can, and plug the hole in the cake with it. I used a 12-inch pan and made two layers. 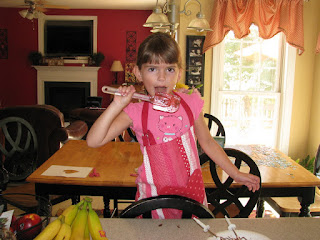 Of course, I had a little helper in the kitchen begging to lick the spoon! 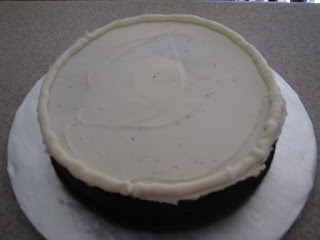 You should fill your pans 2/3 full with batter, which I thought I did, but obviously I overfilled them because I ended up with super thick layers.  After they cooled, I iced the first layer with buttercream icing, then make a little wall around the outside edge so the filling wouldn’t seep out.  Speaking of filling, I had just ordered some caramel sauce from my neighbor who sells Tastefully Simple.  This stuff is so incredible.  I decided to use it to fill the cake. YUM! 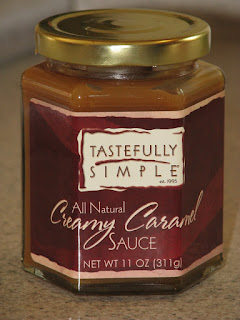 This stuff is truly sinful! 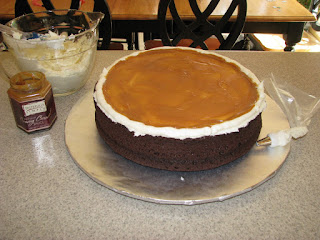 Then add the second layer and ice the whole thing with buttercream.  The great thing about fondant is that the buttercream layer doesn’t have to be perfect.  I just did a nice thick crumbcoat. 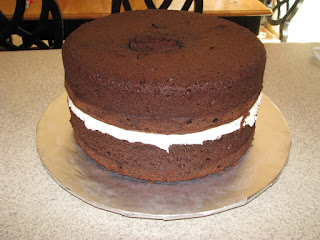 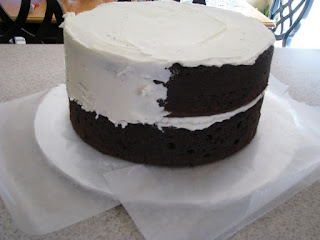 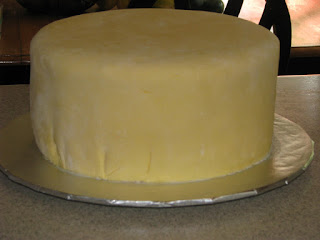 I made marshmallow fondant and colored it a pale yellow color.  Placing the fondant on the cake wasn’t as easy as I thought.  It’s very difficult to get it to lay smoothly on the sides.  I used the Wilton fondant smoother, but it still buckled a little.  Oh well, I did the best I could. Better luck next time! 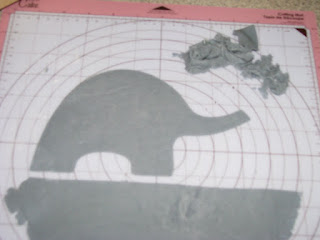 Ok, let’s just say using the Cricut to cut gum paste is not easy. I used Wilton gum paste.  It comes in a big can, and you just add water.  It ends up being about the same taste and consistency as the marshmallow fondant.  You have to play with the settings on the Cricut and roll the gum paste out to just the right thickness, or your machine will get gunked up and tear the gum paste.  After several unsuccessful attempts, I gave up the idea of putting the name on the cake.  I think the letters were just too intricate, and the machine wasn’t cutting them smoothly at all. 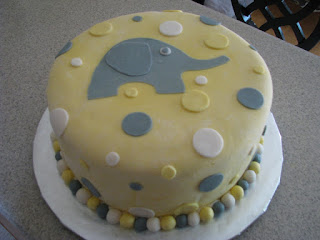 I used the Wilton circle cut-outs to cut circles and also to make the little balls for the border.  It ended up turning out pretty good, considering the difficulty cutting the gum paste with the Cricut.  And it tasted great, which is really what’s important, right? 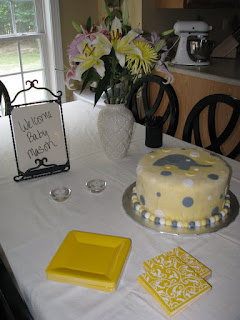 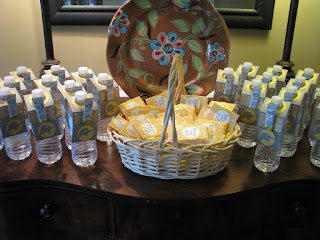 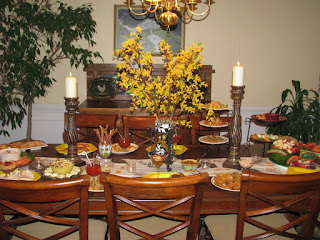 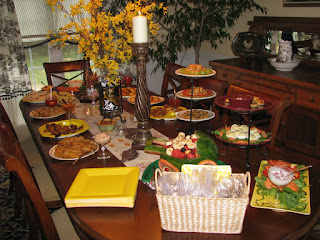 St. Patrick’s Day Oreo Balls (Warning: Your thighs may never be the same!)

Blueberry Scones with Lemon Glaze, fit for a Princess!